“Arnie will be glad to hear I am printing stamps for the Sherif of Mecca. I’ll send him some when they come out. Of course they are only a provisional issue. It’s rather amusing, because one has long had ideas as to what a stamp should look like, and now one can put them roughly into practice. The worst is they can only be little designs, not engraved, so that the finer detail is not possible. I’m going to have flavoured gum on the back, so that one may lick without unpleasantness.”

T. E. Lawrence to his family (The Home Letters of T. E. Lawrence and His Brothers, edited by M. R. Lawrence, published by Blackwell, 1954).

Lawrence spent part of the summer of 1916 wandering around Cairo in search of Islamic motifs to use in a secret propaganda
exercise. The idea was to print a set of postage stamps as a way of spreading news of the Arab revolt. He was said to have personally supervised the production of the first three stamps which went into issue at the end of September 1916 (and was still telling the story about the flavoured gum nearly 20 years later: strawberry essence on the red stamps and pineapple juice on the green stamps). 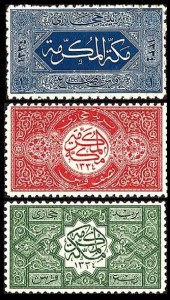