After Lawrence re-entered the RAF in August 1925, he served
as Aircraftman T. E. Shaw at the Cadet College in Cranwell,
Lincolnshire, until December 1926.

Lawrence was assigned to B Flight, acting as a runner and clerk for the men maintaining the aircraft used to teach the cadets to fly. It was here that a new and happy phase of his life started. He became fulfilled with his role in the RAF, making firm friends among his fellow aircraftmen. This period of relative contentment is reflected in the last few chapters of The Mint, his book about the RAF. 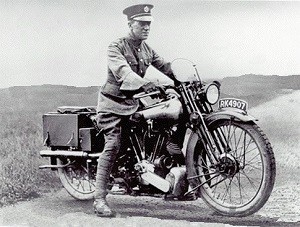 Lawrence bought a new Brough Superior
motorcycle to celebrate his return to the RAF and it was on this 1925 SS 100 named George V that he made many journeys around the countryside for the pure pleasure of riding.
A cine film was made of him riding George V at Cranwell – the only known film
of him on one of his Broughs. It is this motorcycle that appears as the mighty Boanerges on which Lawrence roars about in The Mint.

‘Another bend: and I have the honour of one of England’s straightest and fastest roads. The burble of my exhaust unwound like a long cord behind me. Soon my speed snapped it, and I heard only the cry of the wind which my battering head split and fended aside. The cry rose with my speed to a shriek: while the air’s coldness streamed like two jets of iced water
into my dissolving eyes. I screwed them to slits, and focused my sight two hundred yards ahead of me on the empty mosaic of the tar’s gravelled undulations.’

The A15 between Sleaford and
Lincoln is most probably the stretch of road where he claims to have raced – and beaten – a Bristol Fighter on his motorcycle.

In a chapter of his book called The Road, Lawrence’s prose brilliantly evokes the thrill of fleeing along,
until he eases Boanerges down the hill and into Lincoln. Arriving at
Lincoln Cathedral, he stables the ‘steel magnificence of strength and speed at his west door’, and des-
cribes having a ‘cup of real chocolate and a muffin at the teashop’.

Lawrence writes of sluicing his head with water outside the White Hart. If you are visiting Lincoln in his footsteps, take a look to see if the yard-pump is still there. Then head to Brown’s Pie Shop in Steep Hill where a plaque informs passers-by that Lawrence lodged here on occasion. 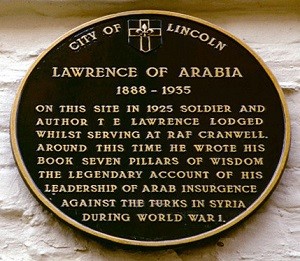 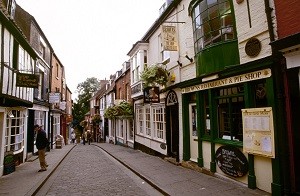 Before returning from Lincoln, Lawrence would take the opportunity to stop at shops and farms to buy bacon, sausages, eggs and dripping to take back for his fellow servicemen at Cranwell.

Today, RAF College Cranwell is still where officers receive their training. The main entrance hall displays a portrait of Hugh Trenchard, ‘creator’ of the RAF and friend of Lawrence. The library contains a huge quantity of Lawrence-related material, including a proof copy of the Subscribers’ Edition of Seven Pillars of Wisdom which is kept in its own display case. It was while at Cranwell that Lawrence finished writing Seven Pillars, and his subsequent posting to India at the end of 1926 was partly to avoid the publicity caused by the publication of his book and its abridgement, Revolt in the Desert.

As a working RAF station, Cranwell has all the normal security
considerations and visits have to be made by arrangement. See Newsletter 113 for a report and photographs of the Society’s most recent visit in September 2015.