There seems little doubt that Lawrence’s years in Plymouth were one of the happiest periods of his life; truly his ‘golden reign’ as
he inscribed a copy of his translation of the Odyssey that he gave to
Clare Sydney Smith, wife of his commanding officer at RAF Mount Batten, Wing Commander Sydney Smith.

Lawrence’s first view of Plymouth on February 2 1929 was obscured by a blanket of a dense fog. He arrived on board a P&O liner, the
Rajputana, having been summoned home from India after rumours appeared in the press concerning his supposed involvement in an
insurrection in Afghanistan.

After a month’s leave in London, he was posted to the flying boat unit at RAF Mount Batten, where his arrival is memorably
described by Clare in her book, The Golden Reign.

‘One cold March afternoon a shining and powerful Brough motor-
bicycle roared to a standstill at the gates of Cattewater. On it was a small blue-clad figure, very neat and smart, with peaked cap,
goggles, gauntlet gloves and small dispatch-case slung on his back. Aircraftman Shaw had arrived to take his place in the miniature world of an RAF Station.’ 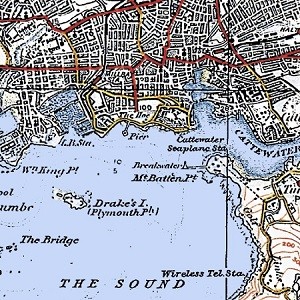 The peninsula of Mount Batten, as seen in this extract from the 1919 Ordnance Survey map, is a dog-leg shaped spur of land in the north-east corner of the great natural harbour which is Plymouth Sound. Separating it from the city of Plymouth is the Cattewater,
a stretch of water about a quarter of a mile wide. Viewed across
the Cattewater from Plymouth, its most prominent feature is the 17th Century artillery tower, perched on almost vertical cliffs.

‘Cattewater proves to be about 100 airmen, pressed tightly on a rock, half awash in the Sound: a peninsular really, like a fossil lizard swimming from Mount Batten golf links across the harbour towards Plymouth Town. The sea
is 30 yards from our hut one way, and 70 yards the other. The Camp Officers are peaceful, it seems, and the airmen reasonably happy. That is good hearing, for me, as I have to share their good fortune.’

The whole peninsula was requisitioned as a seaplane station in 1917, with the nearby Castle Inn turned into the station commander’s home. After being left almost empty after the war, the station was reopened in 1928 under the command of Sydney Smith.

Lawrence worked as a clerk to his commanding officer, helping to
organise the Schneider Trophy race for seaplanes and flying boats which took place off Calshot in 1929.

It was at Mount Batten that Lawrence began his association with motor boats, initially with Clare in their own small power boat, the Biscuit, presented as a gift after the Schneider Trophy event. It was in the Biscuit that the two of them explored the Tamar Estuary on the picnic trips remembered so delightfully in The Golden Reign.

Lawrence’s relative contentment at Cattewater is reflected in the letters he wrote from here. But on the morning of February 4 1931 occurred a tragic accident that was to shape the remainder of his RAF years. Sitting with Clare just below the artillery tower – in a
hollowed-out area they called the Lido – Lawrence witnessed one of the station’s Blackburn Iris III flying boats crash into the Sound, with the loss of nine lives. Taking part in the rescue efforts convinced him of the need to develop high-speed rescue craft for the RAF, which became the focus of the rest of his service career.

Today, a visit to Mount Batten might start with a ferry ride across the Cattewater from Plymouth Barbican. The most prominent sight across the water is the artillery tower standing high on its rocky outcrop, and a breakwater running out into the Sound, built in the 1880s to shelter shipping in the Cattewater, and later used as a platform to hoist planes in and out of the water. But as the ferry draws closer it is possible to see a propellor from a Sunderland flying boat, set up in a small memorial park to commemorate those who served here from 1917-92, when the station finally closed. 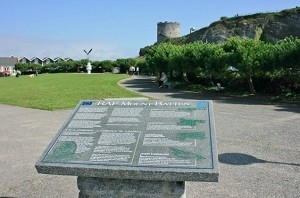 A granite plaque at the edge of the memorial park recounts the history of RAF Mount
Batten and its association with Lawrence. Very little evidence otherwise remains of the RAF’s occupation here. The Castle Inn was demolished in the 1960s. Two remaining hangars (now Grade II listed) are used by yacht builders; two other hangars have given way to a car park. Much of the Mount Batten peninsula is now devoted to housing and marine activities; though memories of Lawrence’s occupation are kept alive in the names of the roads here – Lawrence Road and Shaw Way.

What remains, of course, is the stunning natural setting. A steep path will take you up to the top of the headland on which the
artillery tower stands. Here, a wide space of flat ground, littered with the bases of anti-aircraft facilities installed during World War II, may – or may not – be the Lido where Lawrence sometimes spent his breaks sitting with Clare.

A short ride back on the ferry will take you to Plymouth itself and,
at 3 Elliot Terrace, the imposing house of another of his great lady friends – the MP for Plymouth Sutton, Lady Nancy Astor – from where he would carry the redoubtable lady off on the pillion of his motorcycle. 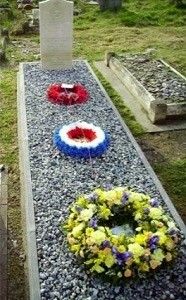 One lasting reminder of those who died in the crash of the Blackburn Iris III flying boat on February 4 1931 may be found at the Ford Park Cemetery in Ford Park Road, Plymouth. Two bodies were recovered from the wreck, and on February 10 1931, Flying Officer Frederick Wood and Leading Aircraftman William Sydney Rutledge were buried at this Victorian cemetery. Thousands of people lined the streets as the funeral procession made its way from the Royal Naval Hospital.

In 2008 – the 77th anniversary of the tragedy – a re-dedication service took place during which a single headstone of Portland Stone was unveiled at the head of the joint grave.

The cemetery can be visited most days. See the website of the Ford Park Cemetery Trust for opening hours.

Click below to view Toll for the Brave,
British Pathé’s film of the funeral procession 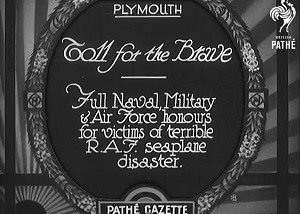