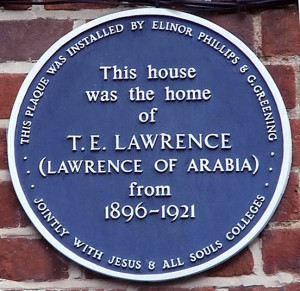 The Lawrence family moved to Oxford in 1896 when Ned, as he was known to his family, was eight years old. It remained the family’s home until the early 1920s. It was Oxford which inspired his
interest in archaeology, in history and in all aspects of learning. He went cycling in the surrounding countryside and started to build up his huge stamina and strength which was to serve him so well in his campaigns in the desert.

It was in Oxford that Lawrence went to school and university. He and his brothers were associated with four Oxford Colleges, and while the City has changed much since those days, the Colleges themselves are little altered. In Oxford it is still possible –at least
in parts – to dip into the world which Lawrence knew so well. 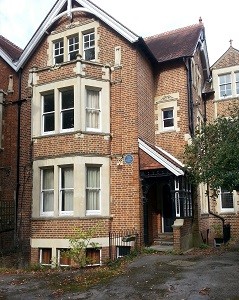 Number 2 Polstead Road is a substantial red-brick semi-detached house built about 1890. It has four floors including a basement. It stood in what was then a newly established neighbourhood just to the north of the Colleges of the University. The area was much favoured by professional men and their families,
including many University dons taking advantage of the relatively recent abolition of regulations forbidding College Fellows to marry.

The Lawrence family moved here in 1896. This was Lawrence’s home while he was at school and university, and his only proper home until he finally settled at Clouds Hill after his retirement from the RAF. The small bungalow built for him in the garden still stands, though altered since his time.

‘I expected the family to walk through the door and sit down to dinner.’ Click HERE to read a member’s extraordinary account of a stay at the Lawrence house published in Newsletter 42

Lawrence’s father died in 1919 and his mother sold the house in the early 1920s. There is a blue plaque noting his association with the house. 2 Polstead Road is privately owned and not open to visitors. 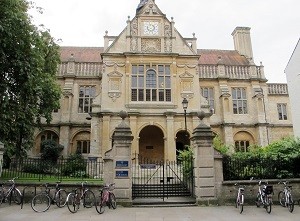 The five Lawrence brothers attended school here. It was a newly opened grammar school, low in fees but with a high reputation, which provided a sound classical education and had excellent links to the nearby University Colleges. Ned Lawrence, as he was known, was at the school from 1896 to 1907. The building in George Street is a substantial and highly ornate design evoking the best of Victorian extravagant architecture. It is now part of the University’s
History Faculty and is not open to the public, but in appearance from the outside it is much as Lawrence would have remembered. 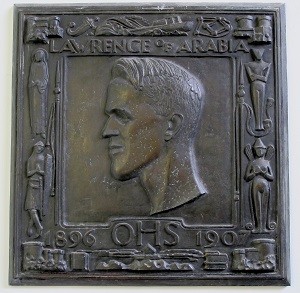 A bronze plaque carved by Eric Kennington, depicting Lawrence surrounded by
images reflecting his different interests throughout his life, is hung on the wall of the staircase, alongside a memorial to the fallen of the First World War, including his brothers Will and Frank.

Evangelical Christianity was an important influence in Lawrence’s upbringing. The Lawrence family attended services at St Aldate’s, opposite the main entrance to Christ Church. Lawrence took an
active part in the life of the church, helping to run its branch of the Church Lads Brigade and teaching in its Sunday School. St Aldate’s dates back to the 12th Century, with the church we see today developed during the 19th Century.

Lawrence applied for a history scholarship at St John’s College, which had already accepted Bob, his elder brother. He then turned to Jesus College which had special awards open only to men with Welsh connections. Although he had no Welsh ancestry, he had been born in what was then Caernarvonshire and this enabled him in 1907 to be elected to a Meyricke Exhibition with an annual value
of £40. 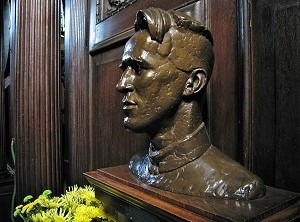 Jesus College was founded in 1571 by Queen Elizabeth I at the
request of a Welsh lawyer and clergyman, Hugh Price. The compact, centrally-located college has beautiful quadrangles tucked away off Turl Street. Lawrence spent much of his three years not at the College, but living at home. His thesis on the Crusader castles which won him a First Class Degree is held in the College library. In the Chapel at Jesus College is a cast of Eric Kennington’s magnificent 1926 bronze bust of Lawrence.

Jesus College, along with the other Colleges listed on this page, can be visited most days. See the various College websites for details of opening hours.

While Lawrence was at university, some of his tutorials were with Ernest Barker at St John’s. He was also familiar with the College
because two of his brothers, Bob and Will, were undergraduates here. The college is well known to the T. E. Lawrence Society as it is a regular venue for the Society’s biennial Symposium.

In 1910 Lawrence became a Senior Demy at Magdalen College. This was a form of scholarship, arranged by D. G. Hogarth to provide Lawrence with funds while he worked as an unpaid assistant at the British Museum’s Carchemish excavations in Syria. 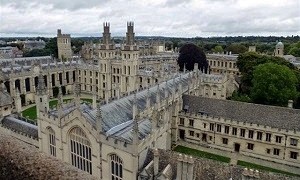 In 1919 Lawrence was elected to a seven-year Research Fellowship at All Souls. The College was founded in 1438 and is primarily an academic research institution and has no undergraduate members. Election as a Fellow provided Lawrence with an income while he worked on Seven Pillars of Wisdom. He had rooms in the College but spent most of his time elsewhere. His Fellowship of All Souls takes prominence on the headstone of his grave in Moreton, Dorset.

All Souls College has a collection of Lawrence memorabilia including the gold dagger he sold to Lionel Curtis for £125 to pay for repairs at Clouds Hill. It also holds a bronze bust of Lawrence sculpted (from memory) in 1946 by Lady Kathleen Scott, widow of Scott of the Antarctic, and presented to All Souls after her death. 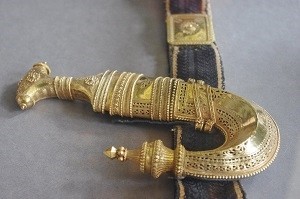 Lawrence became interested in archaeology while a schoolboy, and scoured Oxford building sites for fragments of mediaeval pottery. He gave the best examples to the Ashmolean Museum, where he
became an enthusiastic helper. Some of the most influential friendships of his youth were with staff at the museum. He later helped to build the Ashmolean’s collection of Hittite seal-stones.

The Ashmolean holds some important portraits and drawings of Lawrence by Augustus John and William Roberts, as well as John’s portrait of Feisal used as the frontispiece to Seven Pillars of Wisdom. Various other works and objects associated with Lawrence in its
collection include some of his brass rubbings, Arab robes and the carved doors he brought back from Jidda after a visit in 1921.

Lawrence was a regular user of the Bodleian Library during his
undergraduate years. In 1923 he presented his major working
manuscript of Seven Pillars of Wisdom (the so-called Oxford Text) to the library. The Bodleian holds a substantial collection of Lawrence letters including all those associated with his family; it is a primary source for any serious student of the life of T. E. Lawrence and
access to the papers is given to any serious researcher.

Museum of the History of Science

Lawrence was a keen photographer, a skill learned from his father. Between 1911 and 1914 he was responsible for photography at the British Museum’s Carchemish excavations in Syria. The Museum of the History of Science in Broad Street holds the camera that Lawrence used at Carchemish, and also his father’s camera.

Wolvercote Cemetery in north Oxford was opened in 1889. It is here that Lawrence’s parents are buried, as well as his elder brother Bob. The graves are unmarked, but visitors to the cemetery might be able to find them using the following description from Dick Benson-Gyles’ book The Boy in the Mask: The Hidden World of Lawrence of Arabia. The book also contains a photograph of the graves.

Thomas and Sarah Lawrence’s “plain rectangular grave, part-shaded by fir trees near the junction of two paths, is overlaid with stone chips and contained within granite kerbstones. There is nothing, not even a headstone, to tell the curious observer that buried here is the father of one of the world’s most legendary figures. The only clue is a puzzling dedication carved along the sides of the granite enclosure: ‘In memory of F.H. and W.G. Lawrence killed in action 1915, and of their father who died, April 8 1919. Also of T.E. Lawrence who died May 19, 1935. And of their mother, who died November 15, 1959, aged 98.’ More puzzling still is a small metal plaque stuck in the ground at the foot of the grave bearing the fading inscription: ‘T.E. Lawrence’. It is said to have been put there by Cemetery officials for the benefit of people looking for the family grave – the grave in which Lawrence’s mother also lies, her coffin placed two feet above Thomas Chapman’s.”

Lawrence’s brother Bob is buried beneath the grass separating the two graves above and to the left of that of his parents.