The Siddons Collection consists of a number of artefacts belonging to Victor Siddons, the Royal Flying Corps pilot who flew Lawrence in his plane during the Desert Campaign. Siddons is mentioned several times in Seven Pillars of Wisdom.

‘At Guweira, Siddons had an aeroplane waiting. Nuri Shaalan and Feisal wanted me at once in Jefer. The air was thin and bumpy, so that we hardly scraped over the crest of Shtar. I sat wondering if we would crash, almost hoping it.’

The Collection was bequeathed to the Society by his son, Tony Siddons, and is kept at the Tank Museum in Bovington, where items are regularly displayed in the exhibit on Lawrence. It includes a compass, binoculars, camera, camel rug used for sleeping in the desert at night and brass plates taken from a train blown up by Lawrence’s forces.

Also in the Collection are three boxes of glass lantern slides. These were produced in 1928 by Messrs Newton & Co, London, as part of two lecture sets – The Imperial Camel Corps with Colonel Lawrence, and Lawrence and the Arab Revolt – with accompanying lecture notes written by Captain D. G. Pearman, a member of the expedition. Such lecture shows became popular in the years after the war, and ot was, of course, Lowell Thomas’s Travelogues that introduced the ‘Uncrowned King of Arabia’ to the public. 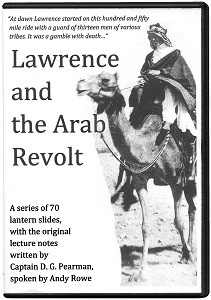 In 2012, members of the Society embarked on an exciting project to recreate one of the old lecture shows – Lawrence and the Arab Revolt.

During visits to the Tank Museum at Bovington, the original lantern slides were digitally scanned. Then a voice actor, Andy Rowe, was engaged to record Pearman’s lecture notes. We were fortunate that the Edwards H. Metcalf Collection of the Huntington Library in California was able to supply some slides missing from our collection.

Lawrence and the Arab Revolt – a DVD recreation of the original lecture show – was given its premiere to an enthusiastic audience at the Society’s 2012 Symposium.

Members of the T.E Lawrence Society can view the DVD in the members area for free.