“Blank! Am in an office all day & every day, adding together scraps of information, & writing geographies from memory of little details. It is the dullest job to hear of, but not so bad in action. The preparations of the Turks seem to be slacking off: I’m afraid there is nothing more cheerful I can tell you.”

The early days of Intelligence work in Cairo, described to Lawrence’s friend and mentor. 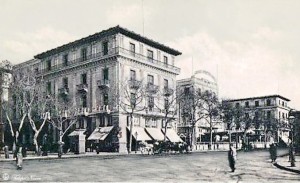 The Grand Continental Hotel, where Lawrence stayed during his early days in Cairo