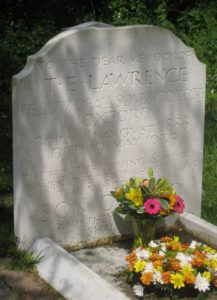 To mark the 82nd anniversary of Lawrence’s death, on
19 May 2017 the Society laid a floral tribute on his grave in the cemetery at Moreton in Dorset, where we were joined by a small group of supporters.

In a short reading given by the graveside, the Society also remembered the taking of Akaba one century before.
In fact, on 19 May 1917, Lawrence and a small party of Arabs would have been on the 10th day of their ride from Feisal’s headquarters in Wejh to the spring pastures of the Howeitat tribe, where they hoped to recruit the Howeitat for the audacious attack on the port of Akaba from inland that Lawrence had devised.

Akaba was eventually captured from the Turks on July 6, and Lawrence was nominated for the Victoria Cross for the many
dangers he faced during the journey. He would eventually be awarded the CB, his actions not having been  witnessed independently by any British officer.

It therefore seemed appropriate, in the centenary year of Akaba, to read by the graveside a few words from Victoria O’Campo’s book 338171 T.E. (Lawrence of Arabia). Here, in writing about his fatal
motorbike accident, she refers to a previous accident he  suffered during the final days before taking Akaba.

… returning to Clouds Hill, he swerved violently to avoid hitting two
cyclists who were unexpectedly in his way, lost control and was flung off his motorcycle.

He had been thrown once over the head of his camel in the middle of
battle. But on this occasion he could not repeat some lines brought up from adolescent memory, as he had done when he felt himself lost in the middle of the enemy.

For Lord I was free of all Thy flowers,
But I chose the world’s sad roses
And that is why my feet are torn
And mine eyes are blind with sweat.

Now, there was no enemy and it was a peaceful English country road.

That the Society is able to lay flowers on Lawrence’s grave to mark significant dates each year is  thanks to an enduring gift from an anonymous American benefactor. The Society is very grateful for this gift which will ensure that Lawrence’s great legacy continues to be remembered.