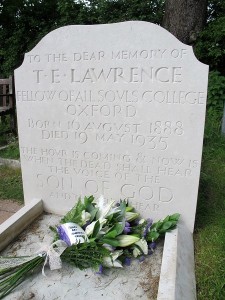 To mark the 81st anniversary of Lawrence’s death
on 19 May 1935, the Society held a simple service
during which flowers were laid on his grave in
Moreton Cemetery.

Around 20 people joined us at the cemetery, where
Society vice-chairman Alan Payne read a number of
quotations, by Lawrence and by his friends, including Winston Churchill’s famous tribute:

Thanks to an enduring gift from an anonymous American benefactor, significant dates in Lawrence’s life – his birth on 16 August 1888, his death on 19 May 1935 and the taking of Damascus on 1 October 1918 – will henceforth be marked by the Society laying flowers on his grave. The Society is very grateful for this gift which will ensure that Lawrence’s great legacy continues to be remembered. 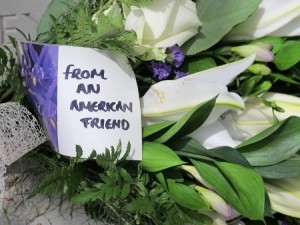 Following the success of the inaugural Lawrence Week at Clouds Hill in 2015, the National Trust held a second event this year,
marking the centenary of the Arab Revolt, and also celebrating Lawrence’s many journeys, with a series of talks, readings and a
cycle trail around Dorset.

Society members were pleased once again to be able to play a leading role during the week; with Theresa Jenkins-Teague – also a Clouds Hill volunteer and a distant relation of Lawrence – even
arranging for an authentic Bedouin tent to be shipped across from Jordan and erected outside the cottage. 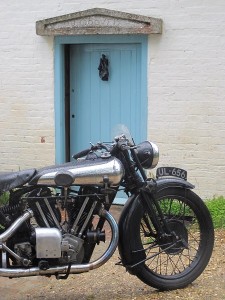 Lawrence Week was also celebrated at Wareham Library, where an open day gave enthusiasts a chance to browse through some of the diverse material in its T. E. Lawrence Collection. Donated partly by the Society, its collection of books, press cuttings and other Lawrence-related material has grown in recent months with a number of gifts and bequests, and is now almost fully catalogued.